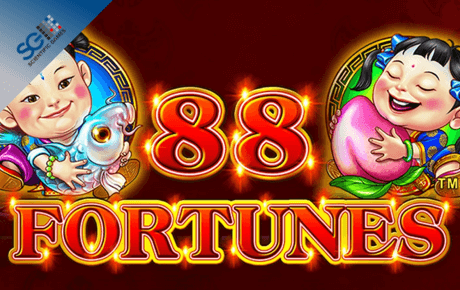 On Daisy Slots has a significant range of different Chinese themed games, but this is one of the best ranking oriental themed slots available if you're looking to play uk slots online.  Sitting high at number 66 in the SlotRank charts, 88 Fortunes has all the gold and grandeur that you would expect to see as well as some interesting symbols that you may not necessarily expect.  This is a high variance slot from SG; a UK slots game developer which has been a big hit with players around the world.

As a UK slot games developers, SG or Scientific Gaming, are one of the longest-standing developers around as they have been on the scene since 1968.  They specialise in Arcade and Bingo games but you will know these games as being Barcrest games not by the name of SG because Scientific Games bought out Barcrest in 2011.  Keeping science at the heart of all of the games they create, they work with their partnering online casinos to be able to provide gamers with exactly what they want from their chosen games which is clear from the SG games on daisyslots.com.

Scientific Games released 88 Fortunes in July 2016 and it has undergone its most recent update in February 2020.  Currently, 88 Fortunes sits in the 66th position of the SlotRank charts and has a Top 100 Silver Badge too.  This is a high variance slot game with an RTP of 96% which can be played on the Daisy Slots site.  Bets can be placed from 8p up to £88 per spin of the reel, keeping in theme with the 88 Fortunes of this three row, 243 payline slot which can be played on any Smart device.

There are two main bonus features for you to look out for during your time playing 88 Fortunes and these are the Fu-Bat Wilds and the Free Spins.  Fu-Bats are like any other Wilds unless you manage to align a high number of them when the symbols on your reels turn gold and access to the jackpot is much easier.  Alternatively, align three Gong Scatter symbols to trigger your Free Spins feature and aim to land as many high-value symbols as you can during your Free Spins to increase your overall win during this time.

Our Verdict on 88 Fortunes Slot – Hit or Miss?

This is a unique style Chinese themed slots game from SG with a high variance.  Though the largest of jackpots seem difficult to win, the amount of Free Spins available make up for this, but other than one other bonus feature, there’s not much alternative action.  There are lots of paylines involved to increase your winning capacity as you play and it is a very inclusive slot with bets able to be placed from as little as 8p per reel spin but the excitement factor seems to be missing from this slot for many players.  However, it does rank highly in the SlotRank charts, as the Astro Pug slot.