Caishen’s Cash by Pragmatic Play is a 5 reel, 243 ways to win slot. The slot includes 3 feature rounds including free spins, wilds, a Money Respin feature and a special jackpot that pays 25x to 1,000x your bet. Stakes on all iOS and Android devices from 25p to £125 a spin. Check out this page for the best Daisy Slots bonuses. 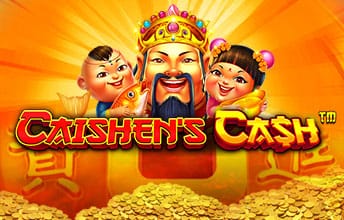 The UK online slot games has a bright and colourful design with the action set in a treasury of gold coins. Symbols on the reels include card values A to 9, a girl holding a gold pot, a bowl of gold coins, a boy with a goldfish and a cat. Caishen pays the highest reward. When 3, 4 or 5 land on the reels, you’ll win 1.66x, 2x or 6x your total bet. The wild in the game can land on reel 2, 3 and 4.

The golden money symbol acts as the bonus. When it lands it activates one of 2 features;

Pragmatic Play was founded in August 2015 and is considered a fast growing online casino game provider. The company has managed to assemble a team of over 100 highly-skilled professionals who create each incredible slot from Sliema, Malta- the company headquarters.

Despite their young age in the industry, they’ve already managed to win gambling awards. They won the 2017 Software Rising Star award, Best Digital Company of 2017, 2017 Best Gamified Experience Company and 2017 Best HR Director of the Year. They’ve had nominations that didn’t go through too like Best Game of the year for Hot Safari and Queen of Gold. Some examples of the slots they offer include;

The Verdict on Caishen’s Cash

Caishen’s Cash by Pragmatic Play is an enjoyable Chinese-themed slot. It has a nice range of extra features that are pretty rewarding. The slot isn’t as volatile as similar slots, but it has a medium to high variance sweet enough to keep things in gameplay interesting. Players can win over 20,000x your stake. If you liked this slot, why not also check out Chilli Heat Slot?