This is a creature so majestic, that it is considered legend!

Safari adventures allow you to see all of the earth's greatest creatures, but none are as elusive as the infamous Great Rhino, an animal said to bring great fortunes to anyone who comes within its’ radius! Tourists come from far and wide to see the Great Rhino, paying hundreds if not thousands just to catch a glimpse, thankfully, this game pays out rather generously, so earning your funds back with a canny profit isn’t too difficult!

Great Rhino is a 5 reel by 20 pay line online slot game from developer Pragmatic Play! There is quite a lot on offer from the moment you hit spin here, everything from respins to free spins rounds; to miss out on this slot is to miss out on some of the grandest sights/wins ever seen, that we promise you! In terms of betting margins, one can experience the power of the Great Rhino from as little as 20p up to £100 per spin!

Startling the beast will only see it run away, which is why we would recommend you read the rest of the review, so you have an understanding of how best to approach it. Those of you out there that have played a Pragmatic Play game before will already have an idea on how this game plays, but we’d read on just to be sure if we were you! 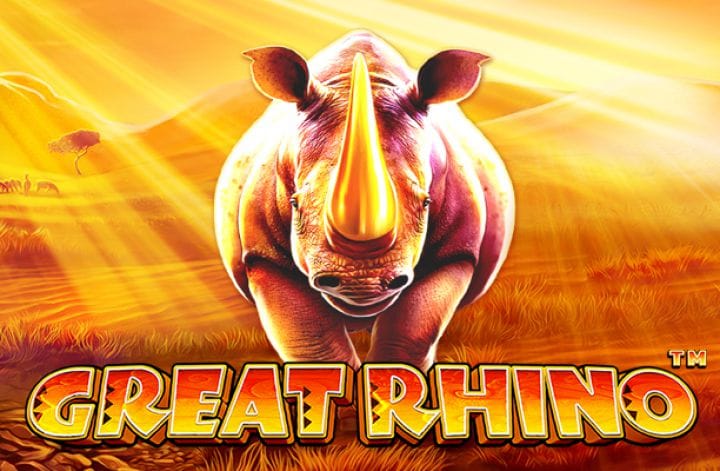 In 2015, developer Pragmatic Play opened their doors for the first time, since then, they have gone from success story to success story across countless online gaming titles — Great Rhino is but one example of the power of Pragmatic Play. Look on any reputable casino site, and you will find at least one of Pragmatic's games front and centre of their website. We can almost guarantee that you’ll always find a Pragmatic Play title, to be honest.

Pragmatic Play is never short on ideas, which is probably why most of their online gaming titles are played by hundreds, if not thousands, daily! There aren’t a lot of developers out right now that can create interest from out of nowhere quite like Pragmatic Play, and if you don’t believe us, why not look at their history of successes and tell us otherwise. Here are a few games to check out, also in the Pragmatic Play library:

A lot of reviews for this slot imply that you are off hunting this legendary animal, we like to think that this is a safari-themed game just based on the other symbols you’ll find across the board as you spin! Hunting for sport is wrong, yes you are hunting somewhat in Great Rhino — hunting for big wins — but still… What Great Rhino offers punters is unforgettable spins on one of the wildest rides you’ll experience all year, now, let’s read on shall we.

Experience the sun-kissed lands of nature courtesy of Great Rhino from developer Pragmatic Play! In this slot, you are given a chance to gawk at some of the wildest creatures you’ll find on planet earth, set against a crisp orange background. The visual elements of the game are very well done, doing a great job in encouraging punters to keep coming back for more, despite saying one more spin about three spins ago!

Symbols on the reels are varied, to say the least, you’ll find everything from rhinos, to flamingos, to crocodiles, all appearing on the reels in waves! Each of these symbols will offer something different as far as scores go, which is why you should be taking the opportunity to check out the paytable whenever you can to see which symbols score what during the heat of play! Symbols in Great Rhino are matched from left to right and can be combined from as few as three symbols in the same line.

On the reels here you’ll find a mix of low-value symbols here too — symbols that all fit within grr games art style perfectly! The highest-scoring symbol on the reels is the rhino symbol itself, one that looks to be changing right at the screen! Matching five of these symbols in the same line will award the player 20x their initial stake — a bonus that could make you a lot of money if you happened to be playing on a high amount! 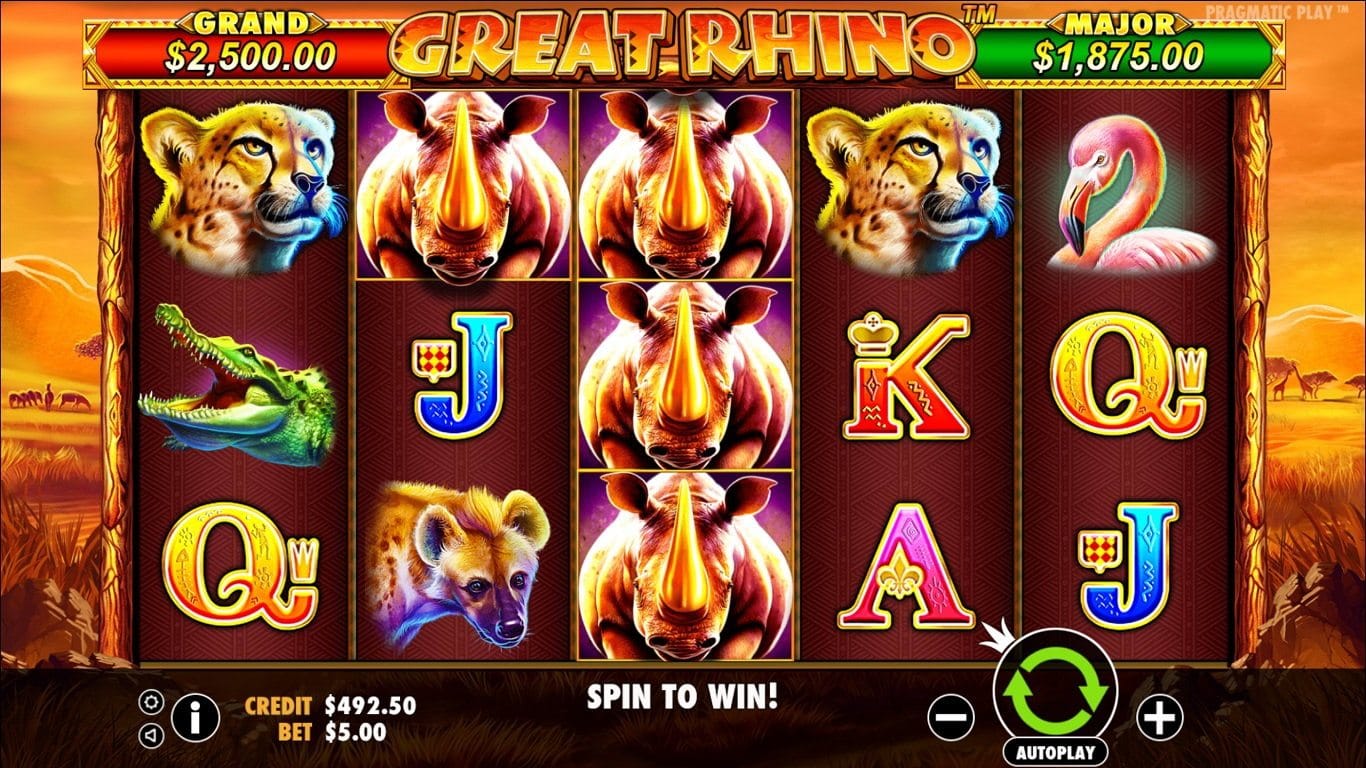 Great Rhino is not without a menagerie one of the best slots for you to look out for with every spin! The wild found in this slot will replace all other symbols, aside from the scatter. If you find five of these symbols in the same row, the game will not only throw around more symbols, but it will give you 25x your stake! If the player matches the scatter symbols that the wilds leave behind, they will be granted access to the free spins bonus.

Free spins are nothing new to Pragmatic Play titles. They have actually been involved in every single one of their games up till this point! Free spins are great in that they will award players multipliers for their efforts simply for playing. The number of free spins earned will depend entirely on the amount of scatter symbols the player can earn — the more, the better as the old saying goes.

Not only will you find a free spins bonus here, but Great Rhino also gives access to the super respin feature. This gives all sightseers a second chance or two to win big! To activate this bonus, you will need to land two or more full stacks of rhino symbols.

If you didn't like this slot game, why not try the most popular game in the market, Starburst slot.

*All values (Bet Levels, Maximum Wins etc.) mentioned in relation to this slot game are subject to change at any time.