Get ready to live out all your dreams of sailing the high seas in Pirate Gold!

Pirate Gold by Pragmatic Play is 5 reel, 40 payline free slot by Pragmatic Play. Features in the game include streak re-spins, jackpot prizes, multipliers that go up to 5x, 2 extra wild symbols, etc. The Free Spins feature starts off with 10 free spins together with a payout equal to your total bet. Each free spin round benefits from a pair of additional wilds and 5x multipliers.

In the Lucky Treasure Bag feature, players will be awarded re-spins where multipliers, extra re-spins, cash prizes and more await you in each single spin. Pragmatic Play promises you a constant stream of action in Pirate Gold. Stakes in this highly volatile online slot start from 40p to £200 a spin on all iOS and Android smartphones, PC’s and tablets so start putting together your devices.

If you’ve played a Pragmatic Play slot game before, then you know the design aspect is always on point. Pirate Gold is no different. The visuals on offer are very well put together. A mist-shrouded harbour lies in the back with 10 standard pirate related symbols appearing on the wooden reels that resemble the deck of a pirate ship. The symbols include a bunch of gold, bronze and silver coins, a telescope, a parrot, a hook hand, a treasure map and a ship. The highest paying symbols are the male and female pirates.

When 5 of them appear on a payline, you’ll win a payout of 12.5x your total bet. The wild symbol in the game is represented by the treasure chest symbol. It can substitute for all other symbols on the reels except the scatter symbol which appears on all the reels except the 1st reel. There are 2 excellent features on offer in Pirate Gold as follows;

Free Spins feature- the Free Spins feature in Pirate Gold starts off with 10 free spins which are triggered when 3 ship compass scatter symbols appear on a single spin. The free spins take place on a brand new set of reels where both the male and female pirate symbols turn wild if they land on the 2nd, 3rd, 4th or 5th reels. When 3 scatter symbols land on the reels, they’ll help trigger an extra round of free spins. There is no limit to the number of free spins you can win. 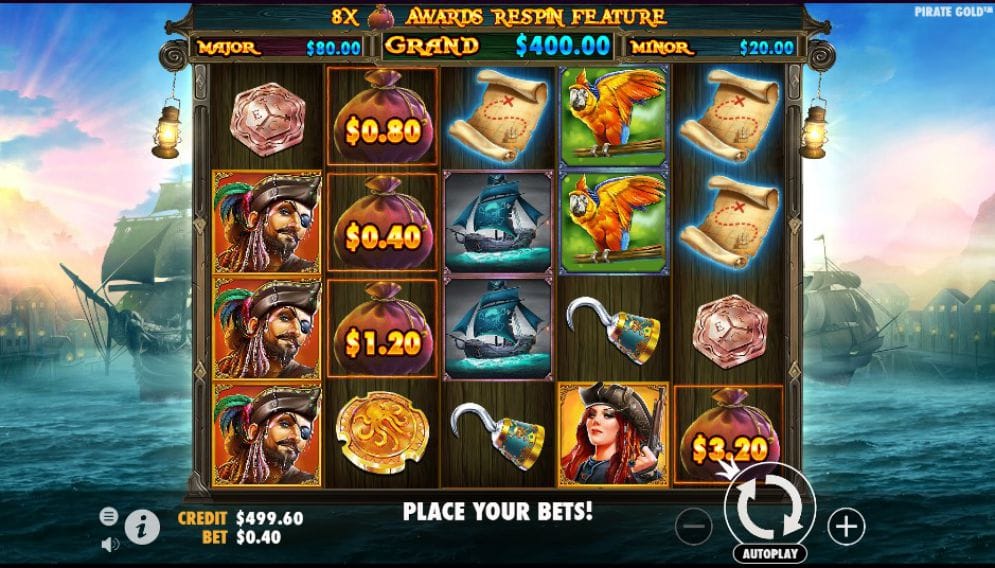 Lucky Treasure Bag feature - If 8 or more money bag symbols appear on the reels, the Lucky Treasure Bag feature will be activated. They usually have a hidden cash amount and/or jackpot prize. The money bags that appeared on the payline to trigger the feature get held in place and 3 re-spins are awarded. During the re-spins, only money bags, re-spin symbols blanks and more multipliers appear on the reels.

Land a money bag and the re-spins will reset to 3. Once you have exhausted your amount of re-spins, all the cash amounts will be added together and the result is what you’ll win. If a multiplier lands, the total win ends up boosted by that amount. Your win here ends up skyrocketing by up to 5x.

It’s also possible to activate the Minor and Major jackpots which reward payouts of 50x and 200x your bet respectively. If you fill all 20 positions on the reels with money bags, you’ll end up winning the Grand Jackpot too which rewards payouts of over 1,000x your total bet.

About the Developer of the Pirate Gold Slots

Pragmatic Play is an online casino software developer that started operating in 2015. By 2017, the company had already grown their workforce to over 150 employees and moved their headquarters to Malta’s sunny east coast resort town Sliema.

They also managed to acquire several award nominations that year taking home awards for Best HR Director of the Year, Best Gamified Experience Company, Best Digital Company of the Year and Software Rising Star. This was extremely profitable for the company not only financially, but also in the matter of optics. The young company is highly respected and known to vale quality always.

Another demonstration of the quality they offer was when they were nominated for Game of the Year in 2016 and 2017 for Queen of Gold and Hot Safari back to back at the EGR Operator Awards. Despite missing out, they proved to the world that they could develop slots considered entertaining enough to be nominated as the best game of the year.

Pragmatic Play has a wide collection of online slots spanning different themes including action, fantasy, mystery, history, humour, love, etc. Beginners and professionals will enjoy skimming through their list of 3 reel, 5 reel and multiple ways to win slots. They also have a good selection of table games including Roulette, Blackjack, Kino, Poker, etc. you can find their slots on any of your favourite online casinos. Just search Pragmatic Play slots. 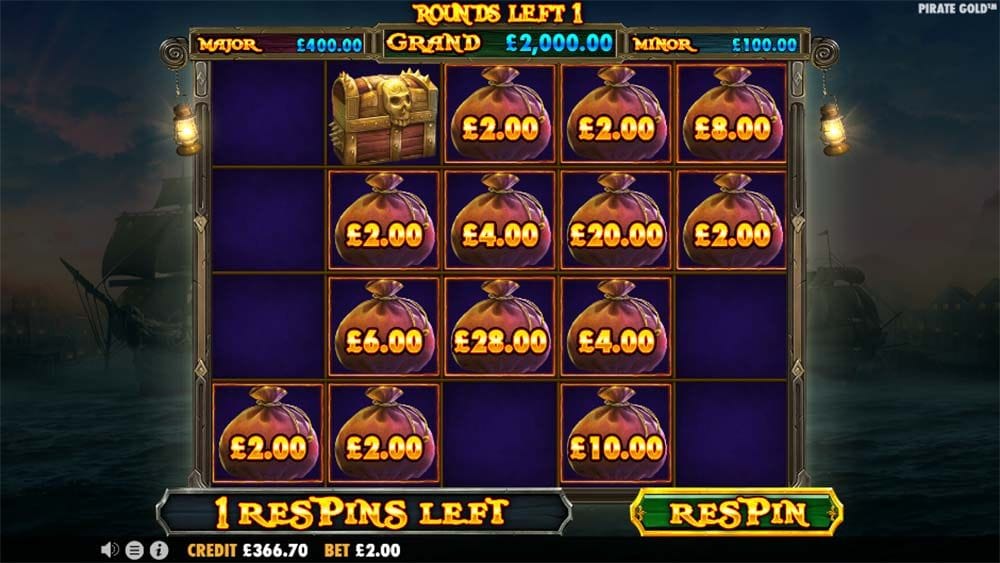 The Verdict of Pirate Gold - Spin or Skip?

Pirate Gold by Pragmatic Play is one of the best Pirate themed slots created. There are excellent visuals on offer backed by a classic soundtrack. The slot’s 2 bonus features launch this slot into a category of its own. The Free Spins feature offers 10 free spins which are activated when 3 ship compass scatter symbols land on a single spin.

The free spins are set on a brand new set of reels where male and female pirate symbols transform into wild symbols if they appear on reel 2, 3, 4 and 5. When 3 scatter symbols appear on the reels, an extra round of free spins will be activated. You can keep winning free spins as long as the 3 scatter symbols keep appearing during the feature resulting in endless free spins. The variance in this slot is extremely high and can have winning payouts going up to 32,270x your bet during the Lucky Treasure Bag feature.

Pragmatic Play’s Pirate Gold promises to be an action-packed slot for both beginners and professionals, just like the equally good Madame Destiny Slot. Give it a swing to see why Johnny Depp couldn’t get enough.