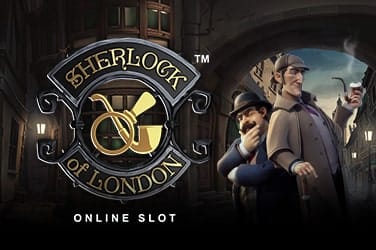 The World's Greatest Detective is back at it again…

Arthur Conan Doyle’s Sherlock Holmes has seen many revisions over the years in the entertainment industry. So much so, that many players think this story has been retold too many times. There is somewhat of fatigue around the Sherlock Holmes characters. In Sherlock of London, players are given a chance to enter the world of Mr Holmes and Dr Watson. Help them, as they look to solve mysteries. For more slots uk visit Daisy Slots!

Sherlock of London is a 5 reel by 25 pay line online slot. One that allows aspiring detectives to play from as little as 25p a spin up to £50 depending on how they wish to play! If you have always wanted to role-play as this iconic character, well, now’s your chance. Fans of Sherlock Holmes will instantly recognise the familiar characters and stories found in this slot. So, we encourage you to play it today! The developer of this game is Rabcat. They are great, innovative games developers.

Slots like Sherlock of London are one in a million! This is fun, colourful and exciting to play. Fans of Sherlock will jump on this one immediately, as mentioned. However, those who don't want to play clearly don't have a clue. Be sure to check out the rest of the review to learn more!

Rabcat - The Developer of Sherlock of London UK slot

For Rabcat, anything is possible, as long as they set their mind to it. This is exactly the mentality developers need to have if they hope to succeed in this industry! We don’t toss around the words ‘iconic' or ‘talented’ too often. This is because it should be reserved for developers and creators who observe it. But, if there was ever a developer who more than lives up to this description, it would definitely be Rabcat! We can’t get enough of these guys, and we can almost guarantee you’ll feel the same way! Well, that is once you play some of their games.

Rabcat is a developer based in Vienna, Austria. One of the most beautiful cities in the world. It is known the industry as one of the most exciting and innovates developers. This company was founded in 2001, and has accumulated quite a large catalogue of games! In recent years, the developer has tried to focus more on dark, brooding slots that create an ambient feeling.

There are plenty of games to pick and choose from in the Rabcat catalogue. Without any hesitation, we recommend you take the time to sit down and play them for yourself. We certainly have a few favourites, so if you’re interested in checking those out, just look out for the following names and enjoy:

And many, many more slot games!

Word of warning: Sherlock of London is a Rabcat developed slot, which does mean that it is incredibly dark compared to some of the other slot titles you might be used to by now. With that in mind, we can only recommend that you play with all the lights off for full immersion, or at least play somewhere that doesn’t have a lot of light shining on you! Rabcat has made this slot to be one of the most immersive out right now, and it would be a real shame if you didn’t play the slot in the way that they intended.

Let’s begin by discussing what the slot looks like. Now, Sherlock of London is quite a murky-looking slot to behold — as mentioned. Look off in the background, and you’ll find Big Ben and the cobbled streets of London. Back in the day, Southerners would liken the fog to that of pea soup. This just so happens to be the best way of describing it here — the perfect condition to commit a crime or two, hence why you’re here!

On the reels, you’ll find quite the mix of symbols, to say the least. Here you will find various low/high-value symbols all jotted about the place. Every symbol you see here will offer something different depending on how many symbols there are involved in the winning line. The goal here is to match as few as three corresponding symbols in the same line. This will trigger a win — keep in mind also that some of these symbols do have bonuses attached which can definitely assist you financially!

Sherlock Holmes, Dr Watson, Moriarty, Inspector Lestrade and Irene Adler can all be found appearing on these reels. If you care about making the most money possible here then you should know that the 221B Baker Street sign is the highest-scoring symbol on the board. If you match five of these symbols in the same line can net the player 40x their initial stake! Be sure to look out for Sherlock himself too, he serves as the games wild icon. On Daisy Slots, there are slots promotions! So, check it out!

Wild symbols here will substitute symbols you see on the board, replacing them with a fresh board! Matching the wild here opens up various new clues here too — it is the Sherlock symbol, so what did you expect? For example, if you are lucky enough to find two wild symbols next to one another in the winning line, then you will gain access to the double win feature. (All wins in this feature are subject to a 2x multiplier)!

Last Notes on this Slot

Dr Watson serves as the second wild here, a symbol that acts more like a traditional wild with a few minor exceptions. Dr Watson here will be your entryway into the world of free spins. Matching Watson can net you up to 10 free spins depending on the number of wilds found in the winning line; the more, the better as the old saying goes. Free spins are valuable in that they take standard gameplay and apply multipliers. These will cause your scores to increase drastically. Play on best online slot games to win. If this game is not within your standards, make sure to check out Aladdins Loot Slot instead.