Luckily, we’re taking back to an Ancient Chinese dynasty this time when the nasty Shi Huangdi was in power thanks to Australian outfit Eyecon Gaming’s online slot game.

Eyecon has a great style of graphics, using cartoon-like visuals to portray their slot themes, and it comes off again nicely in Imperial Destiny. As well as this, there are a bunch of very nicely paying symbols in the base game, plus some cool slots bonus features too.

Play Imperial Destiny from anywhere between 25p and £12.50 per spin on all of your devices at the home of slot bonuses and win 500 free spins, UK slots site Daisy Slots.

Brisbane-based online casino developers Eyecon Gaming have made a bit of a name for themselves with their crazy slot themes and awesome cartoon graphics. While Imperial Destiny isn’t the most outlandish of their slot games online, they certainly have put out some whacky ones over the years. Here are a few of their best to date:

Some other factors that Eyecon Gaming consistently satisfy, ensuring that their slots are top notch, are their fantastic slot bonuses and exciting jackpots.

If you want to take advantage of all the great slots bonus features and themes that Eyecon Gaming have to offer within their slot games then you can check out their best work at UK slots site Daisy Slots. 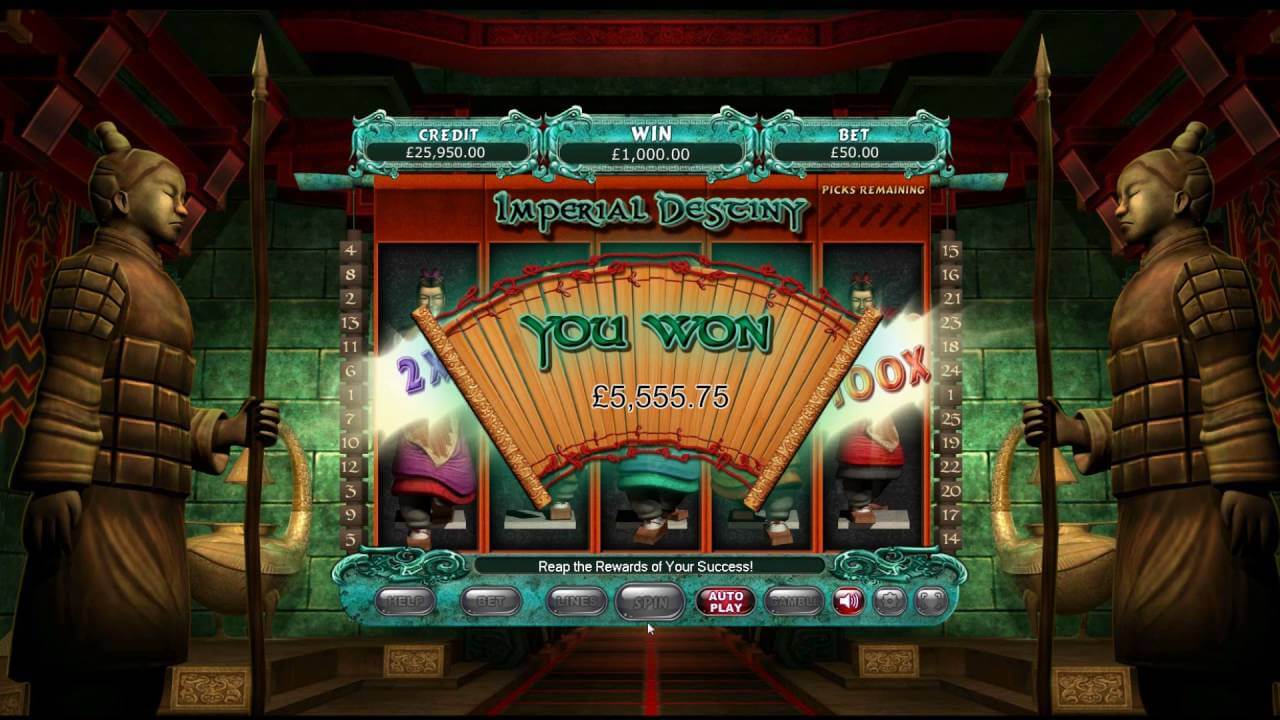 Playing Imperial Destiny - What to Expect

220BC is the year of the setting of Imperial Destiny, and the Chinese palace that the slot is set in is presented in the most interesting of graphics courtesy of Eyecon Gaming.

To win in the base game, you’re going to have to line up matching symbols in combinations of three or more from left to right across the five reels. These symbols actually pay really nicely, and considering that there are some slots bonus features thrown in there as well, this is quite exciting for players.

The symbols are made up of Ancient Chinese ornaments, including the likes of coins, shields, armour etc. The golden earrings are the most valuable to players when landed in combination, as landing 3, 4 or 5 of these in a row will pay out an impressive 10, 200 or 2500 coins respectively.

There’s a wild available in Imperial Destiny as well, which appears in the form of the character symbol of Shi Huangdi himself. He’s only able to land on the second and fourth reels but any winning combination that he has a hand in will be instantly doubled.

Other than the instantly doubling wild symbol, Imperial Destiny has a few more slot bonuses up its sleeve.

For example, landing three or more of the scatter symbol, which takes the shape of a warrior statue, will activate the Prize Pick feature, where you can choose from different statues to reveal random prizes. These random prizes can be worth up to 100x your stake, which is more than a nice little bonus. Plus, if you land four or five statues instead of three, you’ll get to pick from more statues.

Landing three or more of the bell symbol will activate your free spins slots bonus in Imperial Destiny, and 3, 4 or 5 will get you a decent 15, 20 or 25 free spins respectively. These free spins can be re-triggered throughout, with a cap at a massive 400. While we’re not sure how likely earning 400 free spins will be in Imperial Destiny, the fact that it is technically possible is quite interesting in itself.

With awesome slot bonuses and lovely graphics, you would be crazy to miss out on Imperial Destiny at UK slots site Daisy Slots right now.

Easter Island Slot is another popular title that can be accessed today at Daisy Slots!