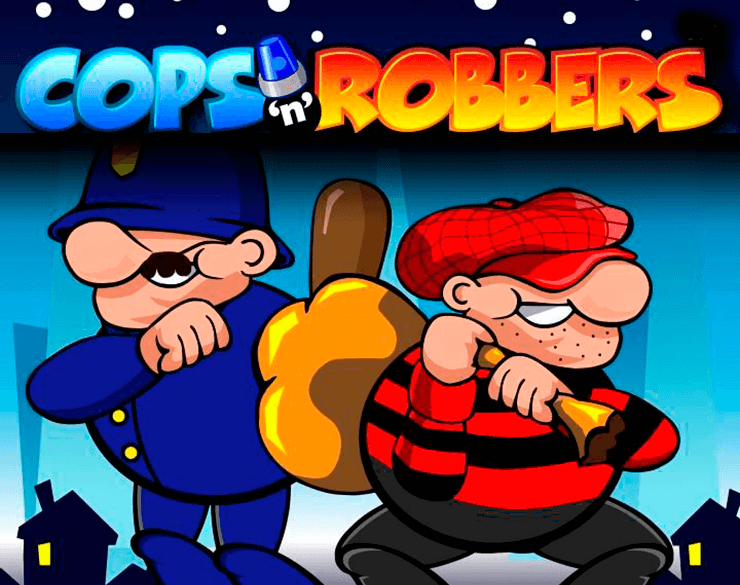 Cops and Robbers, a slot that depicts a rivalry as old as time! Developer Play N’ Go crafted this slot sites uk title, a name that many of you out there should know already if you’ve played any of their previous slot titles! Think of this slot as all your favourite police shows rolled into one, the only difference is you can make a hell of a lot of money for playing — we should mention that you can play practically anywhere too since Cops and Robbers are mobile-compatible too!

Cops and Robbers is a 5 reel by 9 pay line slot machine, one that is playable from as little as 9p on all devices! The cartoonish elements at play here do a great job in keeping you fixated at the screen for hours on end, we’ll tell you that for free. You can learn more about this thrilling chase of an online slot machine by checking out the rest of the review below, or you can go at it alone, your choice…

About the Developer of the Cops and Robbers Slot: Play N’ Go

Racking up hundreds if not thousands of players on a daily basis, it is our pleasure to introduce to you Play N’ Go, one of, if not the most sought-after developer going today! Formed all the way back in 1997, these guys have gone from success story to success story, creating well over a hundred online slot machines and counting!

Earning a loyal and dedicated player base is not an easy thing to do, especially when you consider the amount of competition there is right now that is constantly nipping at Play N’ Go’s heels. This Swedish developer has quite a varied mix of slot machines/online table games for one to pick and choose from — if you enjoyed Cops and Robbers, be sure to look at the following:

Gameplay of Cops and Robbers Slot

Cops and Robbers put you front and centre amongst car chases and all sorts, it’s a hell of a lot of fun. Don’t worry if you think you have to pick a side here, you act more like a spectator, a spectator who will make quite a lot of coin for standing idly by as the action unfolds out on these streets. Play N’ Go have a knack of creating hit slots, and this one has made a pretty decent case as one of their best to date!

First thing you should know about Cops and Robbers is just how basic it is to play — if you’ve played any slot from the Play N’ Go catalogue before then, you should have a basic idea on what to expect from this one. To earn cash here in Cops and Robbers all you need to do is match all those ill-gotten symbols on the reels in combinations of three or higher, the more, the better.

To get the sirens whirring, all you need to do is select your starting bet using the arrows found at the bottom of the screen. Bets in Cops and Robbers can be played from as little as 9p up to £90 with every spin, so you definitely have a lot of options when it comes to how you wish to approach each round. Playing on the higher bet amounts will make you a lot more money, but at the same time, you risk losing more!

Cops and Robbers goes for an incredibly cartoonish approach to the graphics used here, this might throw a few people off who might be looking for a more realistic game, but we like what we see personally. Most Play N’ Go slots utilise bright and bold colours and cartoonish graphics, so what did you really expect? The soundtrack to this slot is quite funky too, making sure you’re nice and immersed with every spin.

Know that each and every symbol you see cascading up and down these reels will offer you something different depending on the symbol itself and the number of them involved in the winning line. Handcuffs, robbers, prisoners cops, watches, paintings, jewellery boxes, diamonds and money bags are a few examples of the many symbols you’ll find in this slot — to learn which icons score what, we’d recommend checking out the paytable.

If you care about making bank from your time here in this slot then be sure to look out for the vault symbol, this is the wild symbol here in Cops and Robbers. Wilds will substitute symbols when slammed into winning combinations! If you are lucky enough to find five of these wilds in one row then you will earn 333x your stake as a reward — so as you can see, it pays to look for those vault icons during the run of play!

The car chase bonus should be sought out as often as possible if you care about making serious cash here in Cops and Robbers. Car chases represent the scatter icons in the game, matching these symbols will net you a rather big score, not to mention they are the keys to the free spins round. Free spins are the online slot equivalent of mounting the curb in a police cruiser — they allow you to speed-up your wins via big multipliers! Up to 25 free spins are up for grabs here, it just all depends on the amount of car chase symbols you can catch! 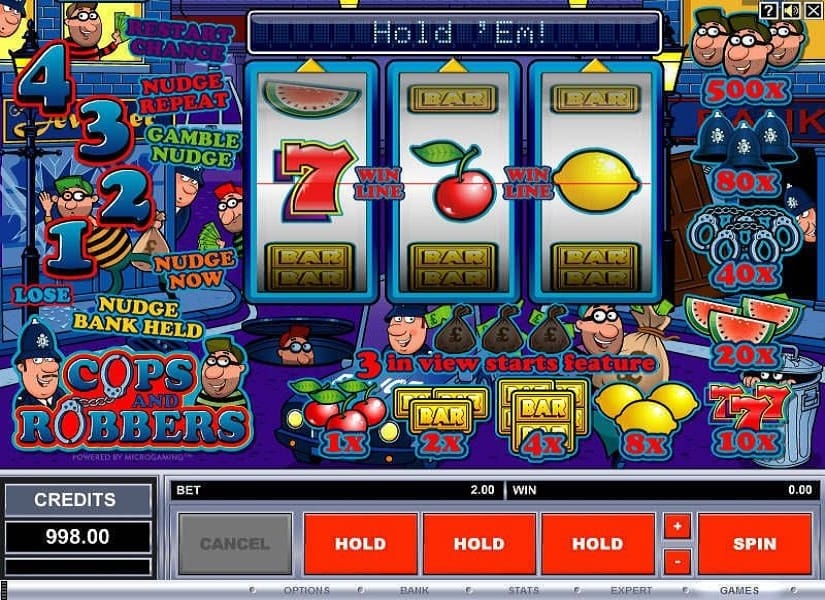 Final Notes on Cops and Robbers - The Verdict

Cops and Robbers from developer Play N’ Go is a fun little slot games, to say the least, one that we will happily come back to in the future knowing that there’s money to be made here. Play N’ Go clearly understand what punters want nowadays in their slot machines, they want fast-paced action, and a cool theme to keep them fixed — in Cops and Robbers, punters get that in spades. Definitely check out this slot today if you haven’t already people!