Set on top of a dimly lit city scape with sky scrapers, susupension bridges and houses interlaced with busy roads, filled with commuters travelling home. This city sets the perfect scene for something clandestine. That is exactly what Elk Studios have brought to us.

This team of tricksters and thieves fly across the wheels as we try to steal ourselves some winnings in this exciting adventure based slot game.

About Elk Studios – The Developers of Lakes Five Slot

Opening up in 2013 Elk Studios has gone from strength to strength, creating new slots games, each better than the last. This is backed up by the winning “Game of the Year” in 2017 from the EGR Operators for their game Wild Toro! Moving on from that they released plenty of top class games including the one we are here to talk about today!

Each slot game they have released has been innovative and varied in style. They aim to please and provide something for every type of slot player which they do with ease. With various play styles and themes that wildly differ. It is highly unlikely that there is not one game you will fall in love with from their wide collection of free slots online games. 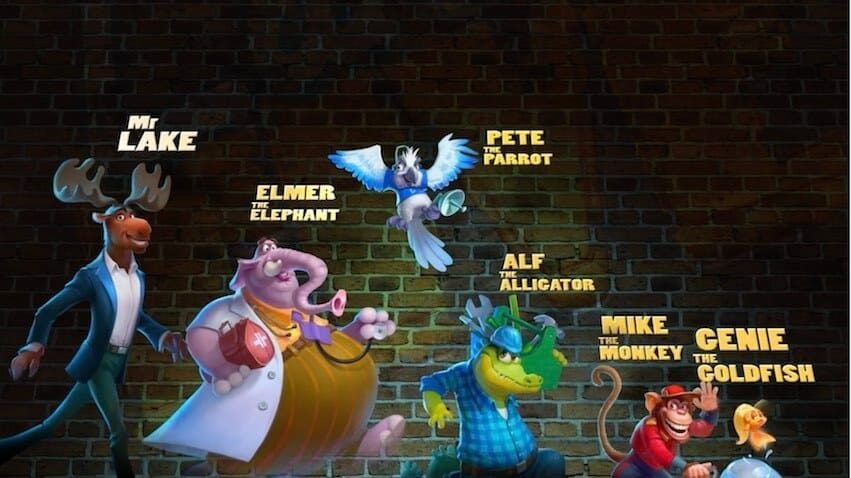 This great slot game has comes with 5 Reels and 4 Rows to have our fun on. This mild increase on the industry standard brings us a seriously impressive 178 Paylines, which have a Medium to High Volatility and an impressive RTP of 96.3%!

With a wide betting range, this game is appropriate for anyone wanting to get a few spins on a beautifully designed slot game. Starting at a min bet of £0.02 and reaching all the way up to a max bet of £100 This game could only be looked down upon by the highest of high rollers. With a maximum win of up to 216,000 time our original stake, who could say there is not good opportunity to be had!

Lake’s Five has plenty of great features embedded into the game. With multiple bonuses that can be earned, let us break down this myriad of treats that are on offer.

Wild Respins - Impressively, Lake’s five has a lower than usual requirement to hit get access to respins. Getting just 2 scatters will provide us with a respin where the scatters will turn into wilds, for each spin that occurs, the reels with the wilds on will move one step down. The gradual moving of the wilds down the reels can mean that the respins can continue for some time as new wilds land on the reels. The symbol to keeps our eyes on

The Heist Bonus Game – Free Spins: We also have the free spin bonus game, giving us even more opportunity to get our hands on those sought after free spins. We unlock this bonus feature when we land 3 scatter symbols. During the free spin bonus round, we can accumulate golden keys which will unlock special features as we go. Those great features are as follows:

Once they have been earned, they will stay active for the remaining spins!  During this phase, there is also one more great feature to be taken advantage of!

Multiplier Wilds - Multiplying wilds! When wilds end up on the same position, from the special bonus effects we just mentioned, land on each other, they will act as a multiplier.

In-built Strategies - On top of the usual gameplay bonus features, we also get access to strategy modes where it will alter our stakes based on different options on offer.

Lake’s Five is a great game for all players, they have thought about all the things that we could want, both as novices and experienced players and they have delivered well with this slot. There truly is little negative to say about this game, which is why it has earned 8/10.

If you enjoyed our review of this game, why not learn more about Kiss Me Clover Slot too?