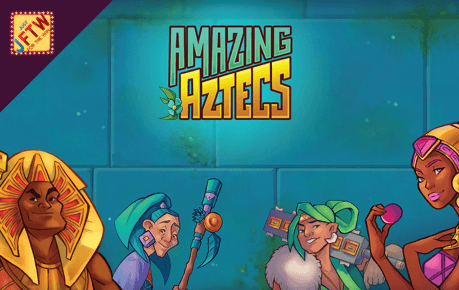 Play Amazing Aztecs today on Daisy Slots and feel as if you have been transported back in time and see if you can uncover the lost treasures of Montezuma.  This is a slots game with a rather cartoon style of theme but with very real prizes to be gained if luck is on your side.  Flowers are the main symbols landing on these slot games reels which gives you a really beautiful way to spend your free time but there are also plenty of interesting characters for you to meet along the way.  Who will make you the luckiest player though?

About JustForTheWin – the Pioneers behind Amazing Aztecs

As one of the most recently established slots developers, JustForTheWin may not have the portfolio size that some of its competitors do, but do not let this fool you.  JustForTheWin have already created and released some of the most loved slots games in their four years due to their highly experienced team and dedication to enhancing the online gaming world.  Working closely with online casinos such as Daisy Slots, JustForTheWin have a wide array of games, jackpot sizes and themes for you to discover.

At number 17 in the SlotRank charts, Amazing Aztecs has been a huge hit with gamers around the world.  Though it is playable on the daisyslots site, JustForTheWin are the masterminds behind this clever and much-loved slots game that has an RTP of 96.03% and a medium variance.  Players can place bets as low as 10p per spin of the reel up to £100, 0on this five reel, three row, 243 payline slots game. Amazing Aztecs was released in May 2018 but had an update in September 2018 which was the most recent update so far.

Aligning five of the main character symbols will see you receive ten times your stake which is a significant prize, but it is the Giant Re-Spin that attracts the most players.  Aim to trigger this as often as possible and you will be able to guarantee yourself some significantly sized wins.  The impressive number of paylines, 243 to be exact, is of great excitement to players, as this enables there to be so many different ways in which winning combinations can be created every single time you spin the reel.

Appearing as a rather simple slot, the slots game of Amazing Aztecs may not be particularly complex but it is hugely popular.  This is mainly thanks to the sturdy way in which it has been developed by Microgaming and the vast number of paylines available.  The favourite way to win is through the Giant Re-Spin as the best bonus feature as there are no free spins available but this game more than makes up for that.  With extensive beauty and four interesting characters to meet along the way, it’s easy to see why this slot places at number 17 in the SlotRank charts and is one of the favourite slots to play on Daisy Slots. Check Avalon if you don’t fancy this one!