In Big Bad Wolf from developer Quickspin, you are given a chance to huff and puff and blow all the houses down! Developer Quickspin is the name behind the game, a developer that are clearly fans of this classic fairytale given the attention to detail here. Look online right now, and you’ll find hundreds if not thousands of slots depicting a fairytale theme, most are incredibly boring and exist only to bleed your funds dry, we can promise you that this isn’t the case with Big Bad Wolf.

Big Bad Wolf is a 5 reel by 25 pay line fairytale, one that puts you in the shoes of a certain hungry wolf, a slot that one can spin from as little as 25p up to £250 per spin spun. Fans of Looney Tunes and other classic cartoons will definitely want to see what’s going on in Big Bad Wolf, we’ll tell you that right now! If you wish to learn more about the Big Bad Wolf, then be sure to take a seat and read the review down below to the very end! 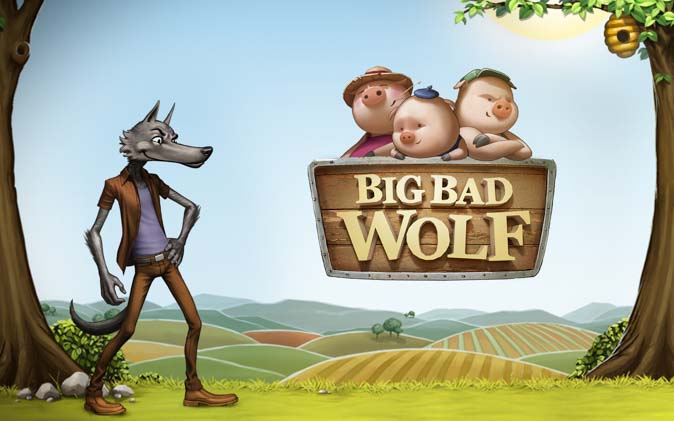 We can thank the country of Sweden for a lot of things, Ikea for example, but did you know they are responsible for giving us the incredibly talented developer known as Quickspin? In their own words, they hope to create the “world’s most awesome video slots” and who could really question them when they’re releasing really fun slots such as Big Bad Wolf and many more to boot!

Did you know that the founders of this developer were actually employees for yet another fantastic developer is NetEnt? It’s true! These guys decided to go out and create slots on their own, something that we’d say they’ve more than accomplished over the past couple of years. If you care about where your time and money is going then always go with Quickspin, they’ll never let you down. Here are a few slots that you have to try from Quickspin if you haven’t yet already:

We aren’t afraid of the Big Bad Wolf, are you? This slot might be one of Quickspin’s best you know, one that gets better the more you play it which isn’t something we say often. If you happen to be the only person on planet earth who has never heard of the story of the three little pigs, then consider this slot an idiots guide. The gist of the story revolves around three pigs who build three houses to protect themselves from a very hungry wolf, what happens after that you’ll determine when spinning this slot…

The detail is definitely here in this www.daisyslots.com game, we mentioned Looney Tunes at the top of the review, comparing the art style here to some of those cartoons is the best way of describing it to those who’ve yet to spin in Big Bad Wolf. Developer Quickspin has always had a knack of crafting pretty slots that very rarely stutter when in motion, and Big Bad Wolf continues this trend perfectly. Playing this slot feels like reading an old book in all the best ways possible, takes us back to when we were kids!

If you want to play Big Bad Wolf all you need to do is select a starting bet of some kind, you hedge your bets using the various arrow keys you find towards the bottom of the screen — hit the left one to lower the bet, and the right one to increase it. Once you are happy with your offering to the Big Bad Wolf, simply hit spin and watch as the game takes on a life of its own. Know that the more money you set down at the beginning, the more money you could make.

Bet you didn’t know that Big Bad Wolf has swopping symbols! That’s right, like many other slots in the Quickspin catalogue, this slot will constantly keep you on your toes by dropping new icons onto the reels at random moments! There’s a reason as to why this feature is known as a swooping one, since symbols are actually rotated randomly, thus giving you multiple opportunities to alter your standing on certain spins — creating a winning line from out of thin air!

On the reels, you’ll find quite the mix of symbols to match. Yes, before you ask, the Big Bad Wolf himself does make an appearance — matching this symbol in blocks of three or more will grant the player a x3 multiplier to play with. Like in most Quickspin slots, wilds are present here, matching them will huff and puff and blow scatters into your fame. Matching these wilds will add more wolves to the fray, so be on the lookout for those!

Those planning on spinning here over extended periods of time might like to know that the pigs you see on the reels will turn wild after a certain number of winning rounds. The first little piggy will turn wild after two direct wins, the second after two consecutive wins, and the third will join his mates after six wins on the trot. Be sure to look at the top of the game board to find a meter that will constantly increase with every win, fill this meter to net yourself a special prize! 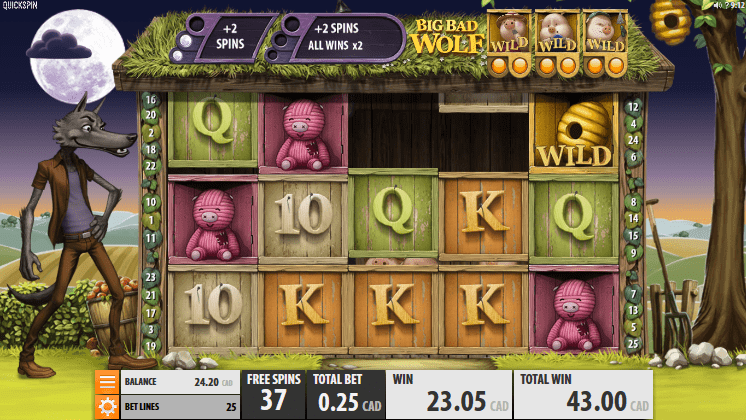 Verdict on the Big Bad Wolf - Hit or Miss?

Who’d have thought that a slot games based on the three little pigs story would blow up as Big Bad Wolf has! This fairytale game has everything you could ever want from a modern slot, great features and a very rich art style that only gets crisper the more you play! Quickspin deserves all the attention they’re getting off the back of Big Bad Wolf — honestly if you’ve never played this slot before then what on earth are you waiting for? Don’t wait until someone blows the house down for you, that’s your job.