The original Gonzo’s Quest, developed by vintage online casino legends NetEnt, was pretty groundbreaking in its innovation, uk jackpot slots, and graphics, so it was surely only a matter of time before someone came along and created a reboot.

That’s exactly what Red Tiger Gaming has done with Gonzo’s Quest Megaways, which breathes fresh life into the original in terms of graphics and slot bonuses plus it brings it arguably the best online UK slots engine, Big Time Gaming’s Megaways.

It’s an Aztec themed slot that you can play from between 10p to £4 per spin. In Gonzo’s Quest Megaways, the RTP sits just about bang on average at 96%. It’s a pretty highly volatile game as is the nature of Megaways although it’s not quite as volatile as some of the other UK slots on the same engine.

With a reasonably small portfolio of games compared to the more well-known slots developers, Red Tiger is relatively new in the world of online casinos. The partner studio of Red 7 Gaming was formed in Bristol in 2014, and since then they have become well-known for their innovative slots bonus features and gameplay.

In fact, they are widely accredited as often having some of the best slot bonuses going. Red 7 has begun to get pretty big for their exciting themed online slots games, and a few examples of these are the following:

The developers of the original Gonzo’s Quest, NetEnt, actually bought out Red Tiger for big money a few years back, which explains why they managed to acquire the rights to the original to create this reboot.

Why NetEnt didn’t self-develop Gonzo’s Quest Megaways is hard to say, but regardless, the outcome is great. 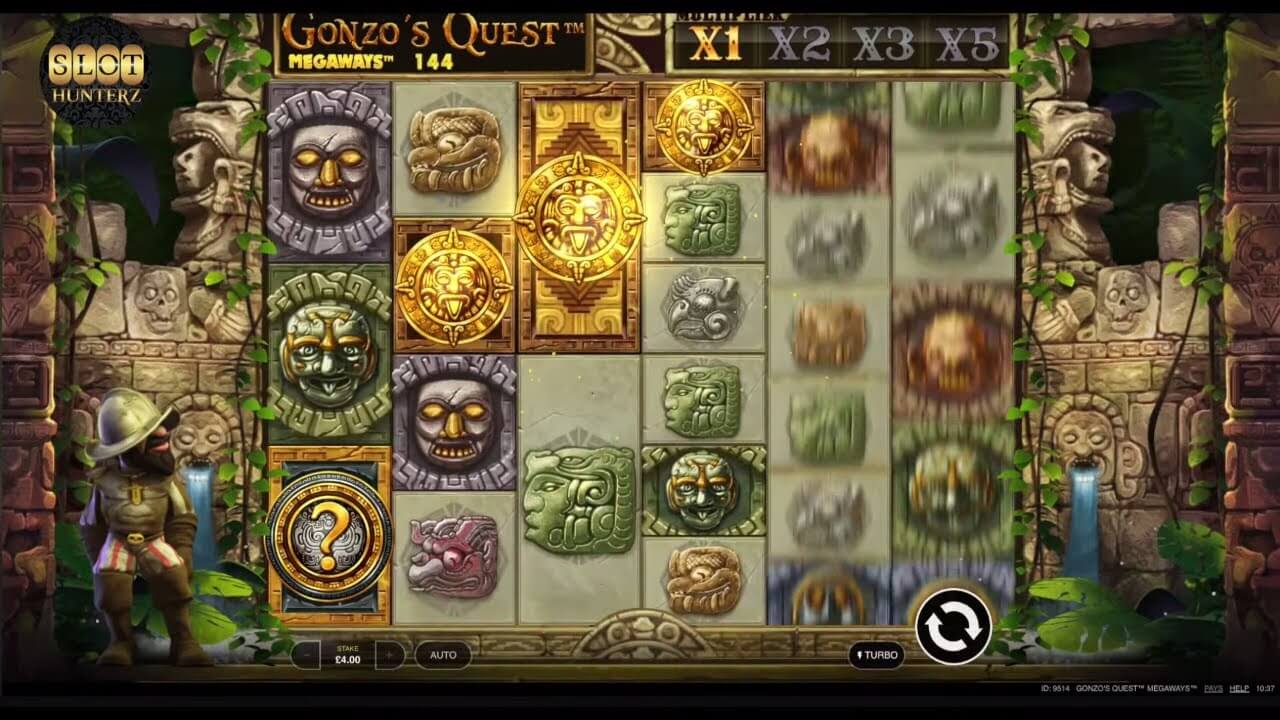 Starting at 64 ways to win, the nature of the Megaways engine is that you have to play your way up to get to that grand total of 117,649 ways to win. To do this, you’ll need to effectively unlock new rows and reels by landing combinations of wins, multipliers, and utilizing free spins to the best of their ability.

Cascading reels make way for some of the best online slots bonuses you can achieve both because of the winning potential and the fact that they’re just a whole lot of fun to play with.

One of the top slot bonuses in Gonzo’s Quest Megaways is the Unbreakable Wilds feature. You can land either 1 or 2 in 1 spin, and they’ll stay there for as long as it takes for you to land a win, constantly changing symbols into others with the aim of helping you improve your combination.

One of the most frustrating things about regular wilds is that they often don’t actually help, but with Unbreakable Wilds eradicates this issue, making it a fantastic slot bonus.

Another of the slot bonuses in Gonzo’s Quest Megaways is the Earthquake Feature, which seemingly happens randomly, and when it does it will shake up the reels and leave all of the low value symbols across them to disintegrate and be replaced by random symbols, some of which are likely to be high value or bonus symbols.

With a wealth of slot bonuses and free spins, Gonzo’s Quest Megaways competes with the best of the best of online slots. In fact, we would go so far as to say this one of the best online slots we’ve played in recent years, and would absolutely recommend playing for free at Daisy Slots when you can.

If you're looking for some of the best slots available, play Age of Conquest Slot today.