Recently we’ve had the privilege to play Temple of Treasures, Temple of Tut, Temple of Iris, and now we have Temple of… Nudges? At first glance it doesn’t really seem to follow suit with the rest. The word ‘nudges’ does not exactly give connotations of Ancient Egypt, so what is the deal here?

Instead of inside of a pyramid, the temple in Temple of Nudges is found in a jungle. In there, the reels are a standard 5x3 setup with a fairly average RTP of 96.03% but there are 243 paylines here which is certainly higher than the average slot - although these wins can only max out at a 0.46x somewhat disappointingly.

With spins between 25p and £250, you can play slot machines uk at Daisy Slots, available across all devices. This slot is a whole lot of fun and we would not want you to miss out. On top of the bonus available in Temple of Nudges, you can utilize the signup offer available at Daisy Slots where you can win up to 500 free spins to get the ball rolling.

Combine that with the slot bonuses we’re about to describe and you could be laughing!

About NetEnt - The Pioneers Behind Temple of Nudges

Founded back in 1996, NetEnt is one of the most historic and original pioneers of online gambling, and one of the best online casino game developers in the world. They currently operate over 200 online casinos worldwide, and this earned them 53.8 BILLION gaming transactions in 2019 alone.

NetEnt is also one of the pioneers of mobile gaming - just under 40% of their revenue was transacted through mobile platforms back in 2016. So, rest assured, you’ll be to access the majority of their newer UK online slots games on the majority of devices, perhaps in the future including virtual reality as they have been experimenting with recently.

The Scandinavian developers are notorious for their attention to detail with graphics, excellent slots bonus structures, and slot bonuses plus very enjoyable games, including: 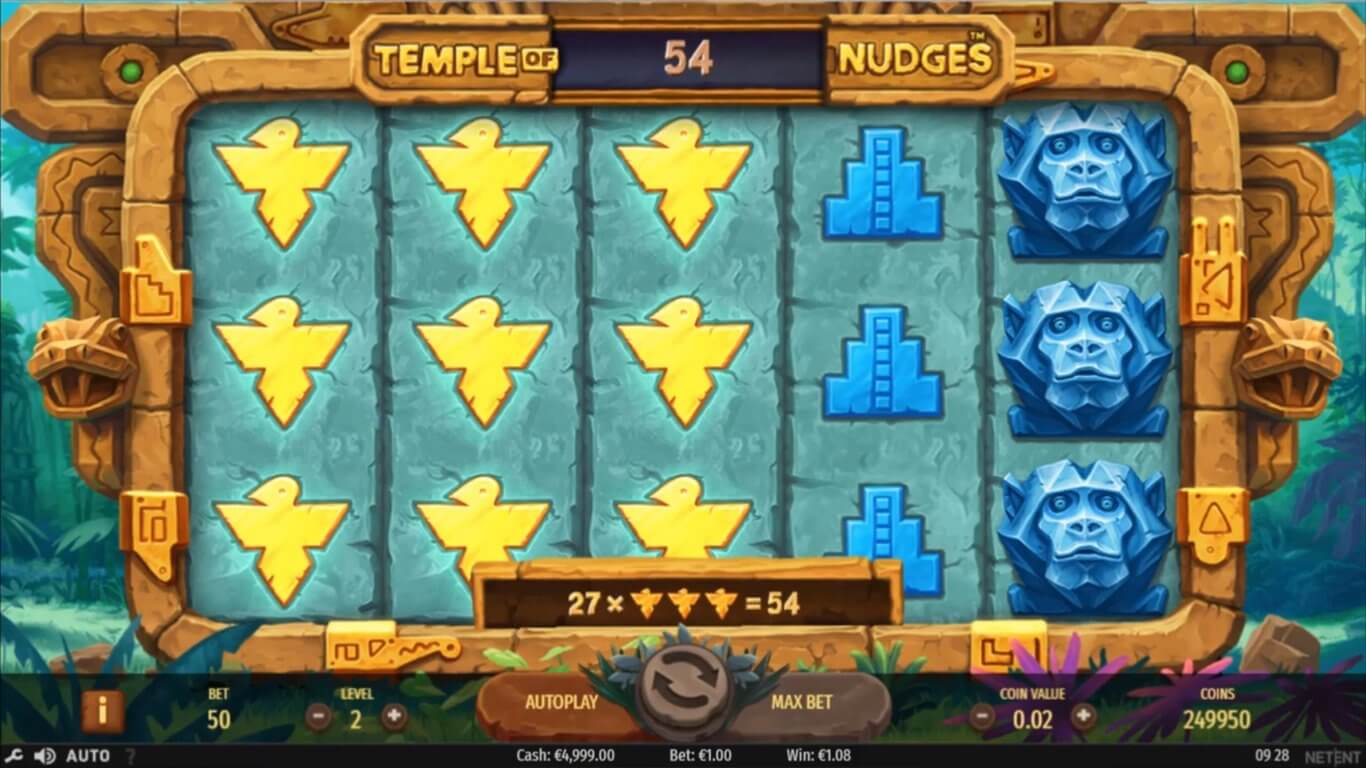 Once you get past the very intriguing graphics and user interface, plus the exciting jungle soundtrack of Temple of Nudges, it’s a pretty average slot in terms of its base game at least.

As mentioned before, the win payouts aren’t great and the RTP is quite average and it’s low variance, but its the slot bonuses of Temple of Nudges that make it count.

The symbols in Temple of Nudges are made up of the classic Royals at the lower end, followed by higher valued symbols which are a collection of Aztec and jungle-themed characters, statues etc. 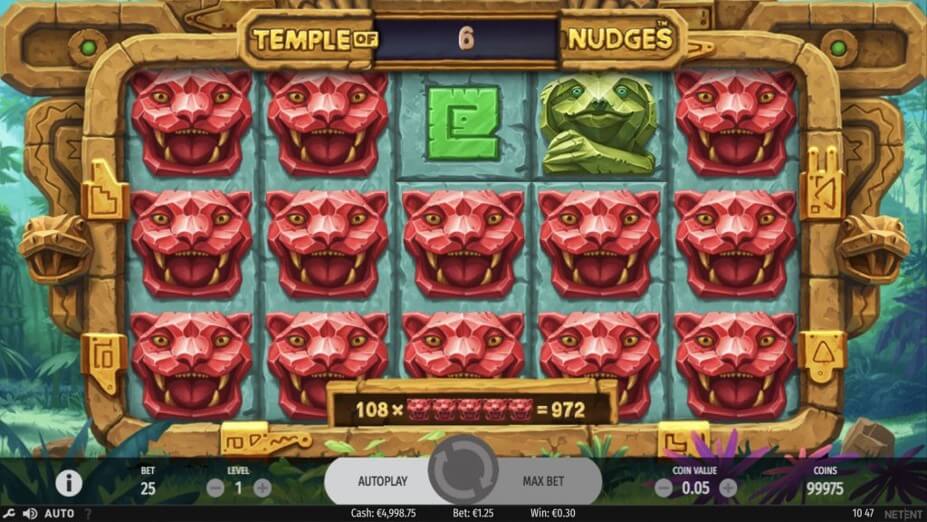 Bonus Features and Free Spins in Temple of Nudges

The game revolves around the Nudge feature, which finally sheds some light on why on earth this slot is called Temple of Nudges. It’s a really cool slots bonus feature that allows you to just keep on winning. To do this, land a combination of 3 symbols or more on adjacent reels to win exponentially.

There are no slots bonus of a free spins feature, unfortunately, but you can activate re-spins from time to time.

Undoubtedly, this is not one of the most exciting slots in the world. There isn’t a huge winning potential, nor are the lower wins particularly good either. You may win a fair amount of times, but it’s never really going to throw up the big bucks by any means.

What this slot does have going for it, however, is the pretty cool graphics and exciting jungle soundtrack and sound effects. As well as this, the slots bonus features are quite interesting including the Nudge feature and the re-spins feature that are on offer.

We’re not gonna lose sleep with excitement about Temple of Nudges but it does what it says on the tin, and if you’re a punter who likes a low variance slot with a jungle theme, we reckon there’s a good chance you could enjoy this one.

If you don't think this is the right game for you, why not try The Great Albini Slot instead.